It’s been a while but I have been working, slowly. I participated in a seconds sale that helped the local library and left me with cash in pocket and some nice feedback. I bought some new glazes that I hope to try(one of them is gold!) Also finishing up a project.

I don’t get to personal on this blog(in spite of all the I’s),don’t know who might be reading it. Some things family and friends don’t need to hear. Obviously I like some attention or I wouldn’t be maintaining a public blog in the first place.

A project i am finishing up has been a little sad. Potters get them. Cremation urns for example. Did not have to do that but I did promise my daughter I would make plant pots for the flowers around her father’s grave.

I was widowed a little over 2 years ago. He had some medical problems that didn’t get better. It escalated quickly and at 55 for me and 22 for my daughter, he died. I couldn’t come up with the words for the eulogy so my daughter did it. It all went well, for a funeral.

Since then we have been maintaining his grave and the flowers, geraniums and thyme have done well. So I have been making pots for them. It has been interesting. I found with large pots, soft clay is better. I was able to get the walls thinner. Firing was itself an adventure since sometimes the pots were neither thin enough or dry enough.Once firing while a useful tool, doesn’t wok if there is an air pocket or slight dampness. It was explosive! Here are the examples of my progress. Haven’t done the next firing yet, 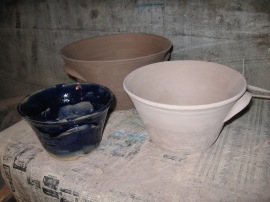 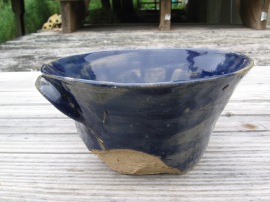 one of the once fires.

but this time they should be dry.

Hi; finished up the old year on a good note. The Holiday Pop up Shoppe did very well. I found that having five and 10 dollar items in addition to some bigger ticket items helped my sales greatly. Something to remember for future sales. Sometimes people just don’t have or are afraid to spend a lot of money but they want to buy something.

I did of course have ornaments at 3.00. Those sold very well.  Definitely making more of those for the impulse shoppers. It seems people really want to buy local and handmade but don’t want to spend a lot of money, but are willing to spend some.

I found trying to save time by doing a once fire only works some of the time. The pieces really have to be dry, almost doesn’t cut it with explosive results. I will have to find a way to slow down the cooling process since that seemed to be part of the problem. At lower temperature the once fire wasn’t bad. So onward, more learning and more doing. Until next post!

Some of my display at the shop!

Like Loading...
I run into the situation sometimes of my pottery being seen as precious because it is handmade. While there is comfort and value in having something handmade, part of the value of pottery is its’ usefulness. I present to you some possibilities.

Meatloaf patties with barbecue sauce and cheese on a wheelthrown stoneware platter.

Steak with fried potatoes and kale on stoneware plates.

I felt really successful the other day. I sold two chip and dip sets! Then i realized i didn’t take any pictures. Not my best move. I need to remember to take pictures. Anyhow, here are some pictures i did remember. Some are from my Etsy shop.

i looked at the strainer after washing dishes. Looks like i am a potter after all.